Sequestration Countdown – Republicans Will Lose….But Will They Take America Down With Them 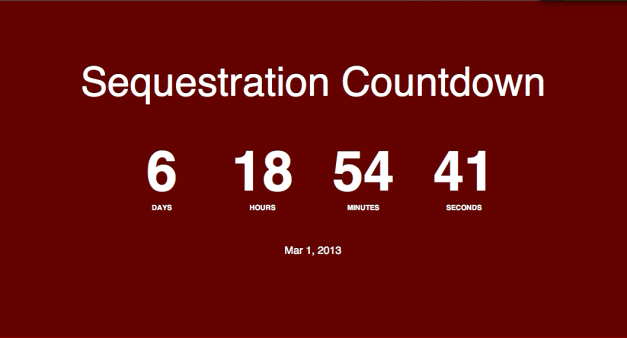 What is the sequester battle? In a nutshell, it’s an attempt to refight the 2012 election, only this time on terms way less favorable to Republicans.

Republicans want to move early to a balanced budget. They want to reach balance through spending cuts only, no tax increases. And they want the spending cuts to fall more heavily on social programs than defense, while exempting Medicare and Social Security for current beneficiaries.

The president wants to move later to a balanced budget. He wants to rely more on tax increases, and he wants the spending cuts to apply to Medicare as well as discretionary spending.

We presented those two options to the American people in November, and the president’s option prevailed. Now Republicans want to present the same choice again.

But this time, they will be presenting the choice under extra disadvantages.

1) President Obama is more popular now than he was in November.

2) Republicans no longer have the coordinated voice and decision-making of a presidential campaign.

3) Because the sequester mechanism grants substantial discretion to the executive to determine where the cuts fall, the president gains powerful new leverage to frame the budget choice in ways maximally embarrassing to Republicans.

4) Because sequester cuts will fall on defense, Republicans will lose the support of important elements of their coalition as the contest continues.

Republicans should not try to reshape the government of the United States from the House of Representatives. That always fails. Instead, they should be focusing on these two missions:

A) Work to temper and mitigate the worst of the president’s agenda – and especially the tax increases and regulations coming in Obamacare, and

B) Begin now to frame the 2014 and 2016 choice in ways advantageous to Republicans.

What they are doing now makes neither tactical nor strategic sense. The likeliest outcome of the sequester fight for Republicans is yet another after yet another political defeat.

(Thanks to the Daily Beast for this article)

Before we end today, let’s talk about why the Republican’s are refusing to negotiate…….they are against President Obama’s proposed closing of tax loopholes for the wealthy, such as the one that keeps tax rates on capital gains and dividends low (i.e. they are protecting the likes of Mitt Romney and the rest of the 1%).   Here is the punch line….dividends and capital gains are the biggest contributor to income equality is in the United States (see the graph below).  In short, the Republican strategy is to continue to ensure that the 1% get richer and richer while the middle class and the poor bear the complete burden of reducing the deficit.  There is nothing new to this but I think it is important to continually remind folks what the Republicans are all about.