Sequestration Countdown – The Republican’s Own It….Here Is The Evidence 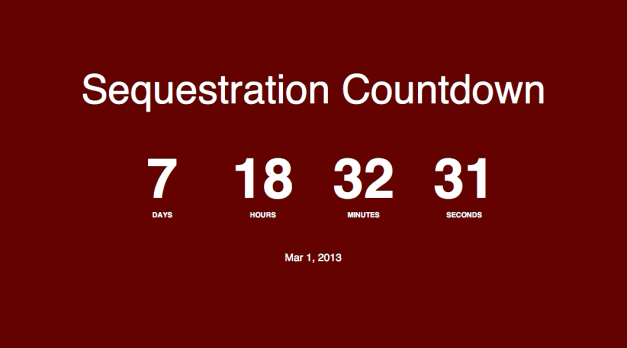 And that’s pretty much exactly what’s scheduled to start happening on March 1. Democrats could just as easily spin this as “Boehner’s Sequester” or “Cantor’s Sequester” and offer indelible digital evidence to back up their claim.

Boehner’s office contests that characterization, arguing that the PowerPoint was simply Boehner’s attempt to explain the president’s plan to the Republican caucus. “This slide simply shows a description of the Budget Control Act after President Obama insisted on including his sequester,” says Boehner spokesman Michael Steel.

The supercommittee failed in large part because the Republican representatives couldn’t agree on revenue increases from closing tax loopholes. After the presidential election, the two parties couldn’t reason together to avoid the next self-imposed hurdle, the fiscal cliff, and instead passed a last-second patchwork that dealt with the tax rates that were scheduled to rise but left the sequester unaddressed because there was no time to hammer out a grand bargain.

And so here we are again, days away from a new deadline, and a sensible grand bargain to deal with our long-term debt seems very far away.

All of the bipartisan plans that have been compiled—Bowles-Simpson, Gang of 6, Rivlin-Domenici—follow the same basic balanced formula of targeted spending cuts, entitlement reforms, and revenue increases from closing tax loopholes. Everyone is going to have to give a little to pass a balanced plan in a divided government. The Obama-Boehner grand bargain that was negotiated in the summer of 2011 and came so close to being agreed upon increasingly looks like the best bet conservatives could get. But they pressured Boehner to walk away without so much as a returned phone call.

Today we see some of the same hyperpartisan fantasies dominating the debate, the idea that waiting just one more election will allow one party to impose its will and avoid any concessions that could anger the base. So Republicans say the problem is only spending—but then in the next breath decry the deep defense cuts that are scheduled to make up half the sequester and pass a bill that would simply exempt their given interests from pain. Liberal Democrats attack the Bowles-Simpson commission, which offered new details on Tuesday as an alternative to sequestration, as a capitulation to Republican priorities and imagine they will retake the House in 2014.

Like a junkie begging for just one more fix before they get straight, these politicos keep begging for one more election before they face facts. Math isn’t partisan. Our current levels of debt are unsustainable. They can’t be solved by simply cutting or taxing our way out of the hole.

The hypocrisy runs deep. While a bipartisan plan like Bowles-Simpson gets paid plenty of lip service, when it came to a vote in the House, it went down to defeat, 382-38, with just 22 Democrats and 16 Republicans voting for it. President Obama also deserves blame for not backing Bowles-Simpson when it was first proposed or aggressively pushing a lame duck grand bargain. And while the GOP has often responded to his outreach with the back of its hand, the president must rise above and lead. Obama’s call to pass a short-term $110 billion stopgap measure is better than the alternative meat-cleaver cuts, provided that it lays the groundwork for a real grand bargain.

The sequester was designed to be so stupid and painful that it would compel the supercommittee—or a lame-duck Congress—to come up with a reasonable alternative. But it was apparently not painful enough to compel the two parties to work together, despite the shared goal of some $4 trillion in debt reduction. And now, faced with the pain that both parties voted for but nobody wants, they’re busy pointing fingers and trying to assign political blame.

Congress should come back from vacation and get back to work. There is no more time to waste. Washington is now the greatest impediment to America’s hard-won economic recovery—a situation that’s equally pathetic and predictable.

(Thanks to The Daily Beast for this article)

Here is how John Boehner reacted when his PowerPoint Presentation was discovered!  Poor baby…. 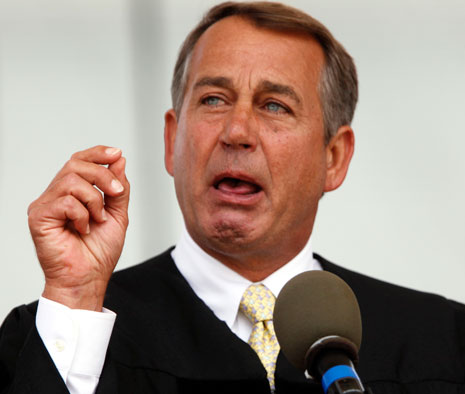 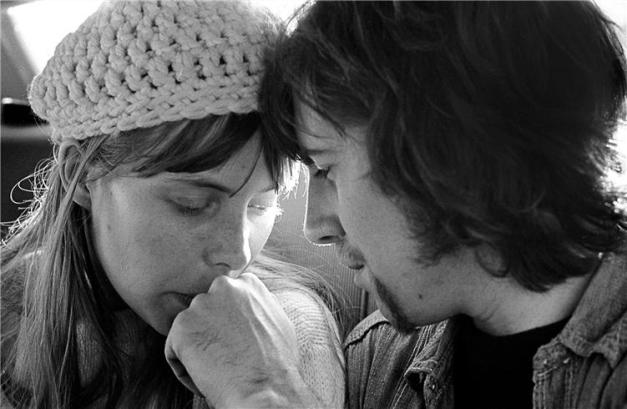 I have made several posts over the past year about response songs.  All of these posts were based on things that I read.  This week I had a moment of blinding insight when I discovered a potential response song myself.  Here is my story…….

On Tuesday I was listening to Joni Mitchell’s 1968 debut album, Song to a Seagull, that was produced by David Crosby.   The first track of the album, I Had a King, came on and it was like I was hearing it for the first time.  As I listened to the lyrics I was thinking about how Joni and Graham Nash had been a couple and I started to wonder if Graham might have been the King that Joni was referring to.  Let’s listen to the song before I continue my story so you can share that moment with me….

This is truly a gorgeous song which makes me wonder why I was thinking so hard when listening to it (but sometimes I can’t help myself).  My blinding insight occurred as I continued to listen and here is how it sounded in my head…..

Holy shit, Graham had a song called I Used To Be A King on his 1971 debut album, Songs For Beginners.  I always thought it was just a follow-on song to his song King Midas In Reverse from his time with the Hollies but maybe it was a response song….

So…out comes Songs For Beginners and before you know it I Used To Be A King is blasting out of my stereo.  Listen with me……

So back to the conversation going on in my head….

These songs have to be related and surely I am not the first person to notice!  Let’s find out what other people might be saying….

Out comes my laptop and off I go to internet, the fountain of all knowledge.  Sure enough, I found a few references to these two songs……….the best one was from likemariasaidpaz.blogspot.com….

I used to be a king
And everything around me turned to gold
I thought I had everything
Now I’m left without a hand to hold
But it’s alright
I’m okay
How are you?
For what it’s worth
I must say
I loved you
And in my bed
Late at night
I miss you
Someone is going to take my heart
No one is going to break my heart
Again
I love that song and I love that album. “I Used To Be A King” is ‘inspired’ by Joni Mitchell’s “I Had A King.” Joni’s song was written to early in her career to have been about Graham (she hadn’t met him yet); however, he wrote “I Used To Be A King” as he and Joni were in the process of breaking up. Though not about Graham, the two songs do work as a call and response.Graham Nash was always my favorite of the three in Crosby, Stills and Nash. I like David Crosby and Stephen Stills (and love Neil Young) but Graham Nash’s vocals and lyrics always spoke to me in a way that few ever manage to. I consider it one of the great losses of this period that Graham released so few solo albums. I think he easily outpaced other solo male singer-songwriters (including Jackson Browne and James Taylor) and that he could have been among the finest.
Songs For Beginners makes that so clear. It remains a perfect album.

After reading this I am convinced that the author of the above post nailed it!  Sure enough, Joni and Graham were not a couple when the song I Had A King was written and recorded!   Even though the song was not about Graham, I Used To Be A King is clearly about Joni and is almost certainly a clever reference back to I Had A King.

At the end of the day, I feel somewhat vindicated by my blinding insight!  Regardless, it was a really fun exercise.  As always, let me know what you think.

Here’s a little bonus.  Let’s listen to King Midas In Reverse, the Hollies song that I thought might might be related to I Used To Be A King…….