Just tonight I posted a Romney video from the Republican Primary where he clearly states that he would do away with FEMA (checkout the post named “Republican Commandment #3 – The Less Federal Government The Better”).

Well now that disaster approaches and everyone is looking to FEMA for help, the Romney campaign is saying that Mitt is all in for FEMA.  A clear case of Romnesia if I have every seen one.  Here is the article from tonight’s Huffington Post.

Would Romney abolish FEMA? His campaign says no

DAVENPORT, Iowa—As Hurricane Sandy bears down on the East Coast, Mitt Romney’s campaign is pushing back against suggestions that he wants to abolish the Federal Emergency Management Agency—insisting that he would simply prefer to see states take a greater role in disaster relief.

At a GOP primary debate in June 2011, Romney, when asked about FEMA’s budget woes and how he would deal with it, had said, “Every time you have an occasion to take something from the federal government and send it back to the states, that’s the right direction. And if you can go even further and send it back to the private sector, that’s even better.”

During that debate, the moderator, CNN’s John King, had gone on to ask if that included “disaster relief.” Romney suggested it did.

The Center for American Progress, a liberal group, called attention to Romney’s remarks in an email to reporters on Sunday.

Asked for clarification today, Romney spokeswoman Amanda Henneberg said the GOP nominee wasn’t implying he would get rid of FEMA, but rather that he simply wants states to play a greater role in disaster response.

“Gov. Romney believes that states should be in charge of emergency management in responding to storms and other natural disasters in their jurisdictions,” Henneberg said. “As the first responders, states are in the best position to aid affected individuals and communities, and to direct resources and assistance to where they are needed most. This includes help from the federal government and FEMA.”

Romney has proposed a budget that includes across-the-board cuts on federal programs, with the exception of defense and entitlement programs, as a way of curbing the growing federal deficit. But he has not said specifically where those cuts would be. Asked if FEMA’s budget could be on the list for potential cuts, Henneberg did not comment.

The debate over FEMA funding could be revived in coming days amid predictions that Hurricane Sandy could cause massive power outage and damage in its path. 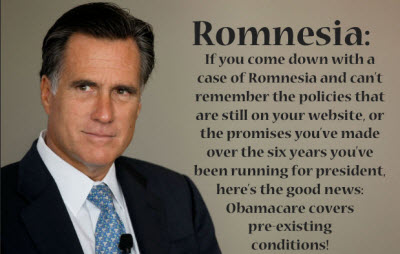 Just for old-time sake let’s listen to the Romnesia song one more time…….