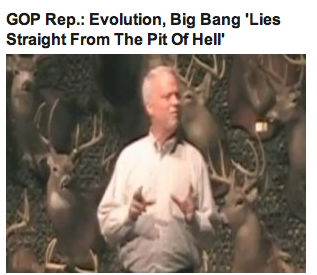 Congressman Paul Broun announced in a recent speech that the Evolution and the Big Ban are lies straight from the pit of hell.  (The details of his comments are provided in a Huffington Post article at the end of this post.)

Now I am personally OK with him believing that (even though it means that he is totally ignorant about science).  One of the great freedoms that we have in the United States is that people are allowed to have their own beliefs.

Having said that, I am greatly troubled that this gentleman is a member of the House Committee on Science, Space and Technology.  This committee is in charge of making important decisions on the direction of science and technology in my country and the fact that someone that is totally ignorant about science is on the committee is bullshit.

Let me make matters a little more troubling.  Another of Mr Broun’s Republican buddies on the Committee is Todd Akin.  In case you have forgotten, Mr Akin is currently running for a Senate seat in Missouri and recently suggested that women don’t get pregnant from “legitimate rape” because their bodies have “ways to try to shut that whole thing down.”  Once again, it is bullshit for someone that is that scientifically ignorant to be on the House Committee on Science, Space and Technology.

These types of beliefs are not limited to these two gentlemen, they are shared by the whole Republican Party.  Be afraid……be very afraid!

I can’t think of a better way to ridicule such ignorance than this great Roy Zimmerman song.  Please listen….I think you will enjoy it!

Congressman Paul Broun (R-Ga.) said last week that evolution and the big bang theory are “lies straight from the pit of Hell.”

“God’s word is true. I’ve come to understand that. All that stuff I was taught about evolution and embryology and the big bang theory, all that is lies straight from the pit of Hell,” said Broun, who is an MD. “It’s lies to try to keep me and all the folks who were taught that from understanding that they need a savior.”

“You see, there are a lot of scientific data that I’ve found out as a scientist that actually show that this is really a young Earth. I don’t believe that the earth’s but about 9,000 years old. I believe it was created in six days as we know them. That’s what the Bible says.”

According to NBC News, Broun’s comments were part of a larger speech given at the 2012 Sportsman’s Banquet at Liberty Baptist Church in Hartwell, Georgia on September 27th. A clip of the video was distributed by the The Bridge Project, a liberal watchdog group.

Broun is a high-ranking member of the House Science Committee, of which Rep. Todd Akin (R-Mo.) is also a member.

Akin made headlines last month for suggesting that women don’t get pregnant from “legitimate rape” because their bodies have “ways to try to shut that whole thing down.”

Posted by thebestmusicyouhaveneverheard on October 6, 2012
Posted in: Southern Rock. Leave a comment

If you have been reading the blog you know I am a fan of Southern Rock.  At some point I plan to do a series of posts exploring the history of Southern Rock but until I find the time to pull that together, I thought you might enjoy this BBC documentary on the subject.

My biggest complaint about the documentary was its limited coverage of southern bands other than the Allman Brothers and Lynryd Skynyrd.  The Marshall Tucker Band, one of my favorites, that did not get the attention that they deserve, although Doug Gray (the lead singer for the band) was featured.  To make up for that omission, watch this video…..

As always, let me know what you think.

Let’s Celebrate Another Victory – “Souls To The Polls” Right On!

The celebrations just keep on coming.  Ohio had sought to restrict black voters from having a three day voting period while allowing people in the military that right.  The Federal Appeals court has struck that down ruling that it was discriminatory (Duh!).  The details are provided below but first let’s celebrate with a song…..maybe you haven’t heard this one…..

Here is the article from the Christian Science Monitor…

In blow to Romney

‘souls to the polls’ voting by blacks

The Obama administration scored another voting rights win on Friday when the U.S. Court of Appeals for the 6th Circuit said the key swing state of Ohio can’t single out military voters for special treatment – a ruling that will re-open a three-day weekend voting period that’s become known to black voters as the “souls to the polls” program.

Most Electoral College analysis lists Ohio as the most critical swing state for Mitt Romney. The Rasmussen Reports poll had Romney trailing Obama by 1 point in Ohio after Wednesday night’s debate. It’s widely believed that military voters are likely to favor Romney while other voters who take advantage of early voting at higher than average rates – minorities, the elderly and the poor – have stronger attachments to Democrats.

The Romney campaign this summer seized on the Obama administration’s decision to confront Ohio’s Republican Secretary of State, Jon Husted, about the decision to close weekend voting to all but military members as a slap against the military. (Husted said he did it at the behest of election officials who wanted the weekend before the election to prepare the polls.) But the campaign said it was about equal opportunity, and the federal circuit court largely agreed.

“The public interest … favors permitting as many qualified voters to vote as possible,” wrote federal Circuit Judge Eric Clay. Judge Clay said it would be “worrisome” if states “were permitted to pick and choose among groups of similarly situated voters to dole out special voting privileges.”

The focus across the nation on integrity and access to polls highlights the massive stakes for both parties around new voter registration and turnout.

While Republicans in 18 states have since last year instituted a slew of voter ID and voter registration rules in an attempt to ensure a clean election, the courts continue to frown on those, in 11 cases so far ruling in favor of easy access over fraud fears. Voter ID laws have been struck down in South Carolina and Pennsylvania, and courts have ruled against strict voter registration rules Florida.

“In the presidential race, it’s hand-to-hand legal combat, with almost every battleground state embroiled in a struggle over voter eligibility,” writes media criticJonathan Alter in an op-ed for Bloomberg News.

In Ohio, early voting, including on the weekends, has become very popular, especially among blacks. Over 13 percent of the entire black vote came during the early voting period in 2008, compared to 8 percent of white voters who voted early. In all, 93,000 Ohioans voted in the three days leading up to the 2008 Election Day.

But Republicans in Ohio, Georgia, Florida, Tennessee, and West Virginia have begun to roll back some of those early voting rules, including restricting Sunday voting, after the 2008 race.

“It just so happened that this was the first time that early voting had been used in large numbers to mobilize African American and Latino voters,” Wendy Weiser, who directs the Democracy Program at the Brennan Center for Justice at New York University School of Law, tells the Huffington Post.

The key sticking point for Republicans has been accommodations for special groups of voters versus the right of states to ensure voting integrity. It’s not an extreme position. Two-thirds of Americans want tougher restrictions, such as voter ID, at the polls, even though many critics liken such restrictions to Jim Crow-era poll taxes.

When Florida passed a tough new voter registration law last year, a sponsor, Sen. Mike Bennett, said he didn’t “have a problem making [voting] harder. I want people in Florida to want to vote as bad as that person in Africa who walks 200 miles across the desert [to vote]. This should not be easy.”

That sentiment has been echoed by officials in Ohio.

“I guess I really actually feel we shouldn’t contort the voting process to accommodate the urban – read African-American – voter-turnout machine,” Doug Preisse, chairman of the county Republican Party and elections board member, wrote in an email to the Columbus Dispatch. “Let’s be fair and reasonable.”

To some, a Republican peel back of early voting is “a clear strike at ‘souls to the polls’ campaign that encourage African-American voters to go vote after church before Election Day,” writes Brentin Mock, a reporter for Colorlines.com.

Democrats have claimed victory in most of the court challenges, and their passion around voting rights, especially on the political left, is understandable. Voter registration analysis suggests that new voter sign-ups in key states like Ohio, Iowa, and Florida have all lagged dramatically behind the surge that came ahead of the 2008 election, when the US elected its first black president.

That discrepancy, political experts say, can’t be completely chalked up to tougher registration restrictions imposed by Republicans. It also speaks to the Obama campaign’s difficulty in mustering the enthusiasm of 2008 amid high unemployment, falling median incomes, and a steadily rising federal debt.