This is the second in a series of posts about Tribute Songs.  Our second tribute song is written and performed by Elton John.  Let’s listen…..

Elton and John became very close in the mid-1970s during the period that John and Yoko Ono were separated (a period referred to as the “lost weekend”).  John was more than a little out of control during this period and it seems that he and Elton had some good time 🙂   Checkout the picture of the two them below…. 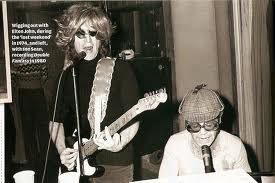 I think that Empty Garden is the best of the tribute songs written after John’s murder.  What do you think?