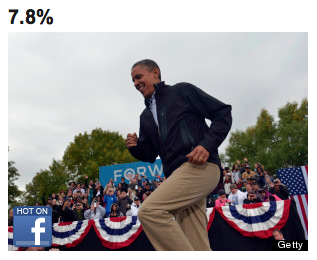 The latest unemployment figures, out just today, show a drop from 8.1% to 7.8%.  Looks like someone’s policies are starting to turn things around!  The details from Huffington Post are provided below but before getting to that let’s celebrate….

Wow…what a great song by Rare Earth and a great live performance from the California Jam in 1974.  In general, I love bands where the drummer is also the lead singer.

Jobless Rate Down To 7.8 Percent

WASHINGTON — The U.S. unemployment rate fell to 7.8 percent last month, dropping below 8 percent for the first time in nearly four years and giving President Barack Obama a potential boost with the election a month away.

The rate declined from 8.1 percent because the number of people who said they were employed soared by 873,000 – an encouraging sign for an economy that’s been struggling to create enough jobs.

The number of unemployed Americans is now 12.1 million, the fewest since January 2009.

The Labor Department said employers added 114,000 jobs in September. It also said the economy created 86,000 more jobs in July and August than the department had initially estimated.

The revisions show employers added 146,000 jobs per month from July through September, up from 67,000 in the previous three months.

The 7.8 percent unemployment rate for September matches the rate in January 2009, when Obama took office. In the months after Obama’s inauguration, the rate rose sharply and had topped 8 percent for 43 straight months.

The decline in the unemployment rate comes at a critical moment for Obama, who is coming off a weak debate performance this week against GOP challenger Mitt Romney.

The September employment report may be the last that might sway undecided voters. The October jobs report will be released only four days before Election Day.

Romney released a statement that focused on the job figures, which declined in September from August. He also noted that manufacturing has lost 600,000 jobs since Obama took office.

“This is not what a real recovery looks like,” Romney said in a statement.

“An overall better-than-expected jobs report, consistent with most recent data that suggest the economy is gaining some momentum,” Guatieri said in a note to clients. “The sizeable drop in the unemployment rate could lift the president’s re-election chances following a post-debate dip.”

Labor Secretary Hilda Solis was asked on CNBC about suspicions that the Obama administration might have skewed the jobs numbers to aid Obama’s re-election prospects.

“I’m insulted when I hear that because we have a very professional civil service,” Solis said. “I have the highest regard for our professionals that do the calculations at the (Bureau of Labor Statistics). They are trained economists.”

The yield on the 10-year U.S. Treasury note climbed to 1.73 percent from 1.68 percent just before the report. That suggested that investors were more willing to take on risk and shift money from bonds into stocks.

The job market has been improving, sluggishly but steadily. Jobs have been added for 24 straight months. There are now 325,000 more than when Obama took office.

The number of employed Americans comes from a government survey of 60,000 households that determines the unemployment rate. The government asks a series of questions, by phone or in person. For example:

Do you own a business? Did you work for pay? If not, did you provide unpaid work for a family business or farm? (Those who did are considered employed.)

Afterward, the survey participants are asked whether they had a job and, if so, whether it was full or part time. The government’s definition of unemployed is someone who’s out of work and has actively looked for a job in the past four weeks.

The government also does a second survey of roughly 140,000 businesses to determine the number of jobs businesses created or lost.

The September job gains were led by the health care industry, which added 44,000 jobs – the most since February. Transportation and warehousing also showed large gains.

The revisions also showed that federal, state and local governments added 63,000 jobs in July and August, compared with earlier estimates that showed losses.

Still, many of the jobs the economy added last month were part time. The number of people with part-time jobs who wanted full-time work rose 7.5 percent to 8.6 million, the most since February 2009.

But overall, Friday’s report dispelled some fears about the job market.

The “U.S. could be growing jobs at a marginally faster pace than feared mid-summer,” Guy LeBas, a strategist at Janney Capital Markets, wrote in a research note. “Even with the issues in Europe and slowing production in China, U.S. economic activity does not look to be bearing the brunt of global downside, at least not anymore.”