Posted by thebestmusicyouhaveneverheard on May 31, 2012
Posted in: International Songs. Tagged: Les Variations. Leave a comment

Since I featured Hocus Pocus as our Long Song Tuesday post for this week, let continue the international flavor.

This is yet another album that I bought back in college without hearing any of the music in advance.  This time, I bought the album based on the album title “Moroccan Roll” which I thought was a brilliant play on “More Rock and Roll”. 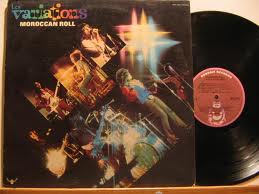 As I found out more about the group Les Variations I discovered that although they we considered to be a French group, three of their original four members were actually from Morocco so I think the title actually had a different meaning for them than it did for me 🙂  Let’s listen to the title song from the Moroccan Roll album (their first album on Buddah, an American record label).

I did not follow the band after my purchase of Moroccan Roll but enjoyed the title song as I hope you did as well.  Let me know what you think.