The Southern California Sound (10) – Where Did These Guys Come From

As we start in on the 10th post of this sixteen post series it is probably a good time to revisit the premise that we started with back on March 19th.  Here is a summary of the premise….

“I was recently reading a paper titled “The Problem of Excess Genius”.  In this paper David Banks, a Statistician, notes “Geniuses are not scattered uniformly through time and space.”  Instead, there are clumps or groupings of genius that occur at specific locations and times. Specific examples of clusters that he cited were: Athens (440 BC to 380 BC}; Florence (1440 to 1490); and London (1570 to 1640). The “Problem” referred to in the title of the paper relates to the fact that no one knows why does this occurs or what the triggering conditions for such a cluster are?………As I began to research the Southern California sound I determined that the cluster phenomenon discussed in the paper cited above was indeed at work.  In a series of 16 posts (starting on Wednesday, March 21) I will build a case for that cluster and show how the musicians in two key foundational groups were the geniuses that created, refined, and influenced the Southern California sound over the time span of a decade.”

Looking back over the past two months, we have started to build the case promised above with the Byrds and Buffalo Springfield providing the foundational groups of the cluster of genius.  We have shown how various members of these groups formed  a number of what we might call the second generation of the Southern California sound.  In today’s post we are entering a new phase of the Southern California Sound, introducing the first group that we have discussed with no links to our foundational groups.

The original paper that I discussed explained the introduction of such new groups by hypothesizing that groups of genius like to hang out together.  This was certainly true with those attracted to the Southern California Sound.  Like minded artist from across the country travelled to, and congregated in, Los Angeles hoping to become part of the scene.   John David (JD)  Souther grew up in Amarillo, Texas.  Glenn Frey grew up in Detroit, Michigan.  Both of them were drawn to Los Angeles in the late 1960 because it was the place to be if you were an aspiring musician.  With some help from what has to be Fate, these two ended up meeting, becoming friends, sharing an apartment, and forming a musical duo that they named Longbranch Pennywhistle.  (Speaking of Fate, believe it or not the neighbor that lived below JD and Glenn was Jackson Browne!  These three would collaborate on some of the most amazing music that would add to the Souther California Sound in the coming years.  More about that in later posts) 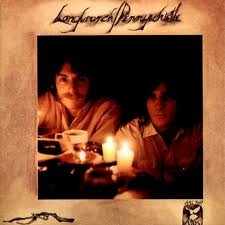 Getting back to Longbranch Pennywhistle, after playing around LA for a while they were signed to Amos records and released a self titled album.  I have to say that this record has been somewhat like the Holy Grail for me in that I have searched for it for years without ever managing to find a copy.  Fortunately, the advent of the Internet has allowed me listen to the music from the album even though I never managed to find a copy.  If you are interested, you can download the album for free from Glenn Frey’s website (glennfreyonline.com).  Until you grab your own copy, let’s listen to one of  my favorite songs from the album, Rebecca.

I actually like this song, and the rest of the music from the album, but Amos records went out of business in 1971 and Longbranch Pennywhistle disbanded in 1971 with the duo never finding any significant success.  Even so,  the duo played an important role in the evolution of the Souther California Sound by providing  an entry point into the music scene for JD and Glenn who we will talk about much more in later posts.

One more footnote before we leave Longbranch Pennywhistle behind.  In 1971, after the duo disbanded, one of their songs which was not included on their album found it’s way onto the soundtrack for a movie called Vanishing Point which is one of my favorite movies of all time.  It is finally available on DVD so if you are interested you should be able to find a copy.  It has a great sound track and is basically one long car chase scene.  Anyway, here is I Can’t Believe It, the Longbranch Pennywhistle song from the soundtrack.

As a bonus, here is a trailer from the movie Vanishing Point.

Album Of The Week #4

Posted by thebestmusicyouhaveneverheard on May 28, 2012
Posted in: Album Of The Week. Tagged: Paul McCartney. Leave a comment

You got a small introduction to the Ram album yesterday with our discussion of Too Many People as it related to the on-going feud between Paul McCartney and John Lennon.  Today, we feature Ram as our album of the week.  I mentioned yesterday that Too Many People was my second favorite song from the album…let’s listen to my favorite.

OK….I know this is a silly little ditty but what can I say.  I liked it in 1971 and I still like it today, no apologies on my part.

In general, Ram was not initially very well received by the critics (or by the other Beatles who all seemed to chime in with disparaging remarks) but opinions seem to have changed over time.  As noted on Paul’s website: “Despite an initially lukewarm Rolling Stone review, it was later hailed by them as one of his best solo albums.  As I have said many times in the past, who really cares what the critics think…all that really matters is whether you like it or not.  So…here is the entire album.  Take a listen and let me know what you think.

By the way, if you are lucky enough to have some spare change laying around you might want to checkout a deluxe book edition of Ram that was released this month with 4 CDs, a DVD, and a book.  In the US it goes for around $90 (US) so I don’t think I will be getting it.  If any of you buy it, let the rest of us know what you think.