Fifty years ago in 1964 Joan Baez and Bob Dylan were quite an item.  Joan, who had been a success since the early 60s, nurtured the young singer/songwriter  starting in 1963 by bringing him on stage to perform during her tours and by singing his songs.  An intense romantic relationship resulted but was over by 1965.  Ten years later Joan wrote one of the best songs of all time about that relationship, Diamonds and Rust.  Here is a great 1975 live performance of that song………

I absolutely adore this song.  I think the following lines are the most romantic lyrics I have ever heard….

Fortunately for all of us, Joan continues to tour today….forty years after the performance presented above and fifty years after her 1964 romance with Bob Dylan.  Here’s a great Buenos Aires performance of Diamonds and Rust from March of this year……

Did you pickup on the lyric change? 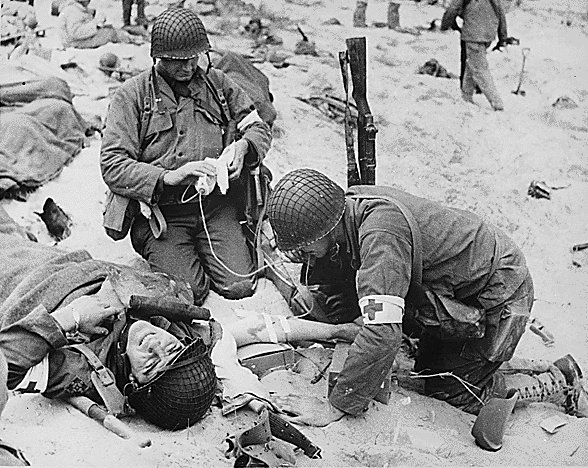 This is Memorial Day weekend in the US.  A time when we remember and honor the men and women who have fought and died for our country.  This is the second of three posts I have planned for this weekend, each of which will include a D-Day article written by war correspondent Ernie Pyle.  Ernie was there and if you read his words you’ll find yourself  transported there as well.

Ernie’s words give me chills and I try to read them every year to honor those that he was writing about.  My uncle, Herman Rice, was one of the paratroopers that was dropped behind the German forces the day prior to D-Day to support the invasion and I can’t think of any better way to honor his memory.

As we remember those that have fought for our country I believe  that it’s important to also spend some time thinking about the importance of working just as hard to avoid wars as we do to fight wars.  I love my country but some of our leaders in the past have chosen to get us involved in wars that we had no business being involved in.  Think Vietnam, Iraq, etc. etc. etc.  Let’s use Memorial Day to commit ourselves to not making such mistakes in the future!

Here is the second of Ernie’s three articles about D-Day, The Horrible Waste Of War,……

NORMANDY BEACHHEAD, June 16, 1944 – I took a walk along the historic coast of Normandy in the country of France.

The water was full of squishy little jellyfish about the size of your hand. Millions of them. In the center each of them had a green design exactly like a four-leaf clover. The good-luck emblem. Sure. Hell yes.

I walked for a mile and a half along the water’s edge of our many-miled invasion beach. You wanted to walk slowly, for the detail on that beach was infinite.

The wreckage was vast and startling. The awful waste and destruction of war, even aside from the loss of human life, has always been one of its outstanding features to those who are in it. Anything and everything is expendable. And we did expend on our beachhead in Normandy during those first few hours.

For a mile out from the beach there were scores of tanks and trucks and boats that you could no longer see, for they were at the bottom of the water – swamped by overloading, or hit by shells, or sunk by mines. Most of their crews were lost.

You could see trucks tipped half over and swamped. You could see partly sunken barges, and the angled-up corners of jeeps, and small landing craft half submerged. And at low tide you could still see those vicious six-pronged iron snares that helped snag and wreck them.

On the beach itself, high and dry, were all kinds of wrecked vehicles. There were tanks that had only just made the beach before being knocked out. There were jeeps that had been burned to a dull gray. There were big derricks on caterpillar treads that didn’t quite make it. There were half-tracks carrying office equipment that had been made into a shambles by a single shell hit, their interiors still holding their useless equipage of smashed typewriters, telephones, office files.

There were LCT’s turned completely upside down, and lying on their backs, and how they got that way I don’t know. There were boats stacked on top of each other, their sides caved in, their suspension doors knocked off.

In this shoreline museum of carnage there were abandoned rolls of barbed wire and smashed bulldozers and big stacks of thrown-away lifebelts and piles of shells still waiting to be moved.

In the water floated empty life rafts and soldiers’ packs and ration boxes, and mysterious oranges.

On the beach lay snarled rolls of telephone wire and big rolls of steel matting and stacks of broken, rusting rifles.

On the beach lay, expended, sufficient men and mechanism for a small war. They were gone forever now. And yet we could afford it.

We could afford it because we were on, we had our toehold, and behind us there were such enormous replacements for this wreckage on the beach that you could hardly conceive of their sum total. Men and equipment were flowing from England in such a gigantic stream that it made the waste on the beachhead seem like nothing at all, really nothing at all.

A few hundred yards back on the beach is a high bluff. Up there we had a tent hospital, and a barbed-wire enclosure for prisoners of war. From up there you could see far up and down the beach, in a spectacular crow’s-nest view, and far out to sea.

And standing out there on the water beyond all this wreckage was the greatest armada man has ever seen. You simply could not believe the gigantic collection of ships that lay out there waiting to unload.

Looking from the bluff, it lay thick and clear to the far horizon of the sea and beyond, and it spread out to the sides and was miles wide. Its utter enormity would move the hardest man.

As I stood up there I noticed a group of freshly taken German prisoners standing nearby. They had not yet been put in the prison cage. They were just standing there, a couple of doughboys leisurely guarding them with tommy guns.

The prisoners too were looking out to sea – the same bit of sea that for months and years had been so safely empty before their gaze. Now they stood staring almost as if in a trance.

They didn’t say a word to each other. They didn’t need to. The expression on their faces was something forever unforgettable. In it was the final horrified acceptance of their doom.

If only all Germans could have had the rich experience of standing on the bluff and looking out across the water and seeing what their compatriots saw.

Since this is a music blog I feel compelled to include music in most of my posts.  As you contemplate my call to avoid wars in the future, listen to this great Joan Baez performance of a Bob Dylan song that highlights the ignorance of the commonly held view in the US that “God is on our side”……..

Oh the First World War, boys
It closed out its fate
The reason for fighting
I never got straight
But I learned to accept it
Accept it with pride
For you don’t count the dead
When God’s on your side