The Republican Right Wing Extremist Tea Party continues to hold the US Government hostage.  Looking like this could go on a while with the House crazies looking to link raising the Debt Ceiling to Obamacare.

First up today a little humor. 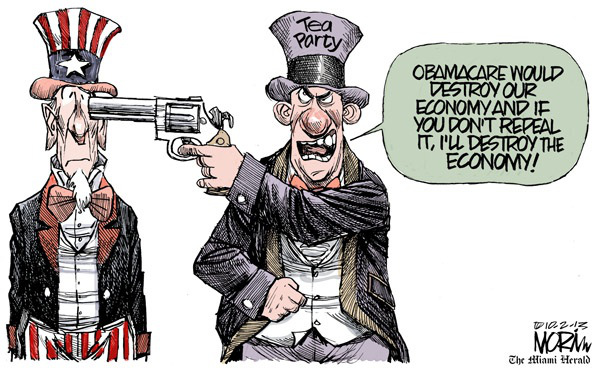 Next is a recent article from The Atlantic that identifies Mo Brooks as one of the 32 Republicans who caused the Government Shutdown.  The North Alabama area that Mo “represents” is tightly coupled with Army and NASA work all of which is based on government funding so Mo’s work to shutdown the government significantly impacts the people he “represents”.  Enjoy your infamy while you can Mo…….you are going down…….

Friday was the fourth day of the government shutdown, and there’s still no sign of an exit. What’s surprising about the ongoing fight is how a small group of members of Congress have managed to bring Washington to a halt. Just months ago, Speaker John Boehner was warning that forcing the government to shut down over Obamacare or anything else was politically hazardous. Yet Boehner remains stuck, his strategy dictated by a small rump of members in the Republican caucus who refuse to budge. On Monday night, as government funding ran out, a group of around 40 hardline conservatives refused to support any resolution to fund the government that didn’t defund Obamacare. Since Monday night, their goals may have become less clear, but their resolve has not weakened. While it’s widely believed that a “clean” resolution would pass the House handily, it would also likely lead to a right-wing rebellion in the caucus that would spell the end of Boehner’s speakership.

So who are those hardliners? To compile this list, we started with a roster that the Senate Conservatives Fund, a group aligned with Ted Cruz, created of representatives who were allied with them. We cross-checked it with the list of members who signed an August letter by Rep. Mark Meadows demanding that Boehner use a shutdown as a threat to defund Obamacare, and against other public statements this week. It’s not a comprehensive roll — there’s no official “wacko bird” caucus that keeps a register — but it’s a window into the small but powerful group of men and women in the House of Representatives who brought the federal government to a standstill.

Quoted: “President Obama and Senator Reid refuse to negotiate over giving regular Americans the same breaks they give themselves, government workers, and big business.”

Quoted: “This is about the happiest I’ve seen members in a long time because we’ve seen we’re starting to win this dialogue on a national level.”

Quoted: “There is some good news out of the shutdown, the EPA can’t issue new regulations.”

Quoted: “We must postpone this overreaching and damaging law that I believe will bankrupt the hard-working every day American.”

Quoted: “It is a simple issue of fairness: Members of Congress, their staff, and the political elite should not be given special relief from the harmful effects of Obamacare while the rest of America is left holding the bag.”

Quoted: “I remain committed in refusing to vote for any proposal that funds the president’s health-care law, and I call upon my colleagues to join me. A temporary government shutdown pales in comparison to the long-term negative consequences that Obamacare will impose on our economy and our healthcare system.”

Quoted: “I believe Obamacare has shut down America, so I’d rather shut down the government than continue doing what we’re doing, which is penalizing businesses and families in this country.”

Quoted: “I am deeply disappointed that President Obama and the Senate refused to come to the negotiation table and failed to fund the federal government.”

Quoted: “A majority of Americans think Obamacare will make health care in our country worse, and they’re right. House Republicans are listening to the American people, and I urge Harry Reid and Senate Democrats to do the same.”

Quoted: “There are just so many broken promises that we need to slow this train wreck, this nightmare. It’s time to put the skids on this thing and slow it down before more people get hurt.”

Quoted: “House GOP is united around a very reasonable policy: POTUS should give families the same Obamacare delay he gave to businesses.”

Quoted: “The American people have spoken already on this: They do not want Obamacare …. It is hurting people.”

Quoted: “Most Americans realize the government shutdown has no impact on their daily life. They got their mail today; they’re going to get their Social Security check.”

Quoted: “We have to get something on Obamacare, because that — if you want to get this country on a fiscal path to balance, you cannot let an entitlement of this size that will truly bankrupt the country and, more importantly, one that’s not going to help Americans with their health care, you can’t let this happen. ”

Quoted: “The American people have rejected Obamacare. The president is willing to put all of that on the line to save his namesake legislation, which I think would go down in history as the largest political tantrum ever.”

Quoted: To Chris Matthews of MSNBC: “You know, your boss, Tip O’Neill, shut down the government 12 different times. And you didn’t call him a terrorist.”

Quoted: “James Madison wrote in Federalist No. 58 that ‘the power over the purse may, in fact, be regarded as the most complete and effectual weapon . . . for obtaining redress of every grievance.’”

Quoted: “We get tons of mail and E-mails and phone calls. And overwhelmingly, those phone calls say, ‘Congressman, do everything you can to get rid of this very onerous piece of legislation. We don’t want the government running our health care.’ And so, from my perspective, we’re doing the people’s work here.”

Quoted: “I was here during the government shutdown in 1995. It was a divided government. we had a Democrat president of the United States. We had a Republican Congress. And I believe that that government shutdown actually gave us the impetus, as we went forward, to push toward some real serious compromise.”

Quoted: “Our society has been held together for over 200 years in no small part due to the belief that our system was fair or equitable, yet the implementation of the Affordable Care Act has been anything but that.”

Quoted: “Americans want Congress to do two things, work together on our national fiscal crisis and stop Obamacare. It’s time Congress started listening to them.”

Quoted: “We aren’t going to be disrespected. We have to get something out of this. And I don’t know what that even is.”

Quoted: “When the Democrats passed [Obamacare] over 60 percent of America’s wishes three years ago, they began this government shutdown.”

Quoted: “It only takes one with passion — look at Rosa Parks, Lech Walesa, Martin Luther King.”