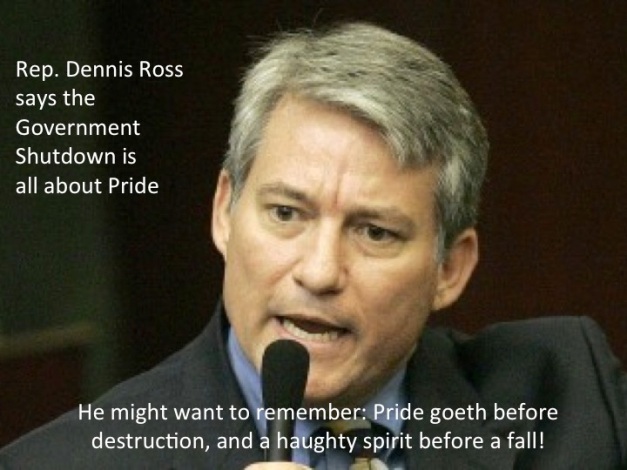 So the latest from the Republican party,  by way of Dennis Ross,  is that the shutdown of the US Government, and dance with the devil threat to allow the US to default on its debt, is now all about Pride.  Read all about it in this article from Huffington Post.

‘Pride’ Is Why Republicans Won’t Budge On

WASHINGTON — With the government shutdown in its fifth day, many Republicans have conceded the fight is no longer about Obamacare. Rep. Dennis Ross (R-Fla.) added his name to the list on Saturday, saying the matter now boils down to “pride.”

“Republicans have to realize how many significant gains we’ve made over the last three years, and we have, not only in cutting spending but in really turning the tide on other things,” Ross told The New York Times. “We can’t lose all that when there’s no connection now between the shutdown and the funding of Obamacare.”

“I think now it’s a lot about pride,” he added.

The fight over keeping the government open began with Republicans insisting that any funding bill include anti-Obamacare provisions, starting with a full-fledged campaign led by Sen. Ted Cruz (R-Texas) to defund the health care law. When that plan was rejected by the Senate, House Republicans offered a series of spending bills that continued to chip away at Obamacare; their final offer included a one-year delay of the law’s individual mandate and a ban on federal health care subsidies to members of Congress and their staffs.

“We need to move on and take whatever we can find in the debt limit,” he said.

But many of his colleagues, particularly in the House GOP’s right flank, have refused to back down. Comments made by Rep. Marlin Stutzman (R-Ind.) last week underscore Ross’ suggestion that many Republicans believe what’s at stake is no longer a matter of policy but one of pride.

“We’re not going to be disrespected … We have to get something out of this. And I don’t know what that even is,” Stutzman said.

The Indiana Republican later apologized, saying he had “carelessly misrepresented” the budget debate.

House Republicans have pushed a series of targeted spending bills to fund parts of the government, notably those that have received the most attention, such as the National Institutes of Health, Veterans Affairs, and parks and museums. The White House and Senate Democrats have rejected the piecemeal approach, pointing out that House Speaker John Boehner (R-Ohio) has the votes to reopen the entire government.