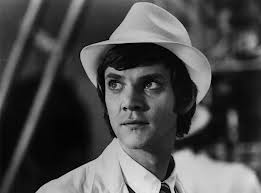 This weekend I was thinking about a movie that fell in love with back in 1973 but haven’t seen again since then.  The movie, O Lucky Man, was written and directed by Lindsay Anderson.  It was a brilliant allegory on life in a capitalist society and a very young Malcolm McDowell was terrific in the lead role of Mick Travis.  The movie was not very successful, it opened and closed in the save week in the town in Alabama where I was attending college, but I was lucky enough to see it.

One of the most interesting parts of the movie was the use of Alan Price (the original keyboard player for the Animals) and his band as kind of a Greek chorus.  They appeared at various time throughout the movie and their songs provided a running commentary.  The songs were quite brilliant  in their own right, providing a commentary on the real facts of life that I was just beginning to learn about as a young man of twenty in the United States.  I bought the soundtrack album and still treasure that vinyl copy.

So……for today’s Two’fer Tuesday Post I want to share two of my favorite songs from the movie.  Their lyrics are as meaningful to me as they were back in 1973.  As always, let me know what you think.