Album of the Week #9 – The Marshall Tucker Band

Posted by thebestmusicyouhaveneverheard on July 8, 2012
Posted in: Album Of The Week. Tagged: Marshall Tucker Band. Leave a comment

I was making my weekly visit to my local record store in 1973 and a colorful album cover caught my attention.  Here is what I saw…. The back of the album cover was a continuation of the same picture and did not offer up any details about the band or its music.  Fortunately for me, the initial run of the albums that were released included a sheet of paper inside the album’s clear plastic wrap which provided some information.  I preserved my copy of that paper and have scanned a copy of it so you can read what I did standing in the record store….. 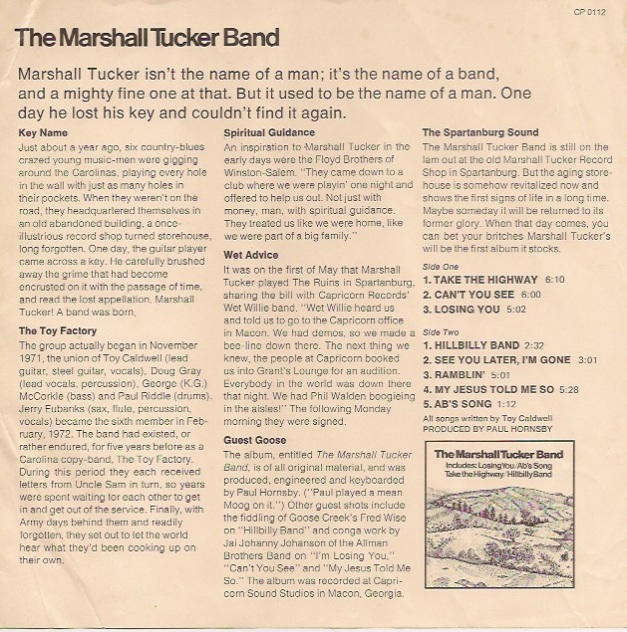 What I read about the group convinced me to buy the album without ever having heard any of their music.  Here were the things that got my attention:

As soon as the record hit my turntable I knew I had made a great decision.  Their sound was clearly southern but at the same time it had some unique features that made it stand out from the rest of the southern rock bands:

They had me with the first song, Take the Highway…….great lyrics about hitting the open road, a great vocal performance by Doug Gray, a nice little jam in the middle, and damn….where did that synth part come from.  Absolutely awesome!  See for yourself…..

If I was infatuated after the first song, I was in love after the second song, Can’t You See.  I was going through some girlfriend issues at the time and this song really spoke to me….

By now I’m sure you’re tired of listening to me babble so I am going to shut up.  I have provided each of the remaining songs from the album below and I truly hope you will give them a listen.  You won’t be disappointed!

My Jesus Told Me So

I was lucky enough to see Marshall Tucker live a couple of times in the mid-1970s and they were great.  I will give you a taste of their live sound in our Long Song Tuesday post this coming week.

As always, I look forward to your feedback.