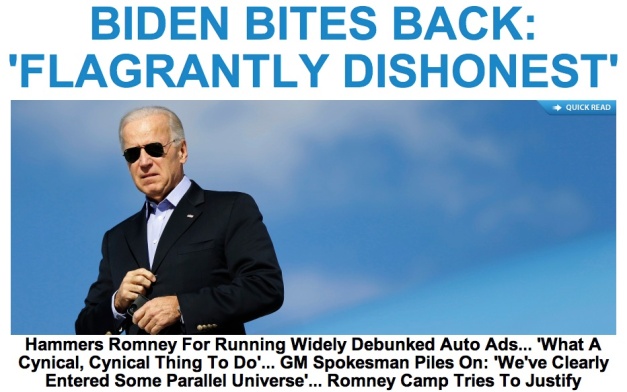 We have talked about this issue.  Glad Joe has chosen to join the fight.  Here is the article from Huffington Post

WASHINGTON — Vice President Joe Biden tore into Mitt Romney on Wednesday for running ads with a widely debunked claim about Chrysler and General Motors shipping American jobs to China, saying it calls into question the character of the Republican presidential nominee.

During a campaign event in Sarasota, Fla., Biden called the latest ad one of the “most scurrilous” and “most flagrantly dishonest ads I can remember in my political career.” The worst part, he said, is that the ad actually caused workers to call United Auto Workers and ask if it was true.

“What a cynical, cynical thing to do,” Biden said of Romney.

The ads, which are being run on TV and on the radio, state that Chrysler and GM are shipping their jeep production overseas. A GM spokesman responded Tuesday with an unusually sharp rebuke, saying Romney has “clearly entered some parallel universe” and that it reflects “campaign politics at its cynical worst.” Similarly, a Chrysler spokesman said there was “no validity” to the ad. Instead, the spokesman said, the company is looking to open new factories in China to meet increasing demand there, a move that would not involve outsourcing American jobs.

Biden’s comments on Wednesday marked the first time he’s addressed the matter. He said he’s never heard of a corporation wading into a election in the final hours of a campaign to give a description of what a presidential candidate is doing. But he said GM’s response was right on the money.

“That’s the best description I’ve ever heard of the Romney/Ryan ticket,” Biden said.

The vice president said the ad calls into question something even greater about Romney: his character. He asked people to consider who they trust more in this election.

“Presidential elections are overwhelmingly about character,” said Biden. “My guy, your guy, has character … [He] does not engage in deception. He means what he says.”

“American taxpayers are on track to lose $25 billion as a result of President Obama’s handling of the auto bailout, and GM and Chrysler are expanding their production overseas,” Ryan said in a statement. “These are facts that voters deserve to know as they listen to the claims President Obama and his campaign are making. President Obama has chosen not to run on the facts of his record, but he can’t run from them.”