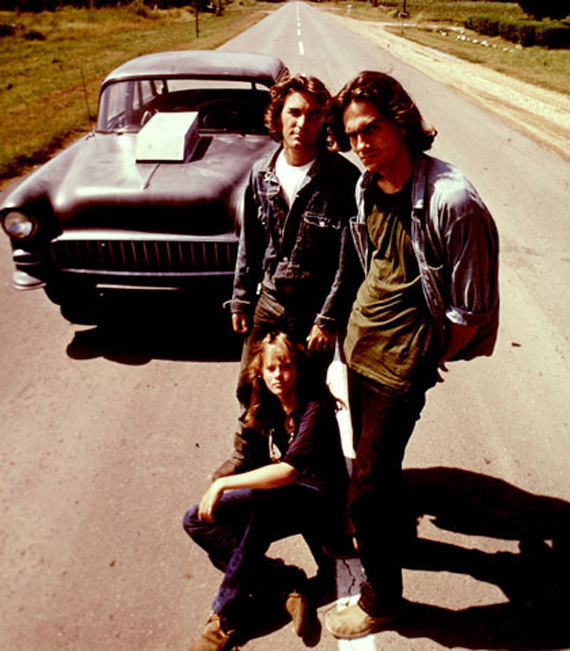 I clearly remember going to see Two Lane Blacktop in 1971 and being completely enamored with the film.  It featured two of my favorite musicians, James Taylor and Dennis Wilson,  both of whom were quite laconic in the movie.   I myself was a man of few words back then which you might find hard to read if you are frequent reader of this blog.  It also didn’t hurt that the movie was all about fast cars…..back in the late 1960s early 1970s I was absolutely muscle car crazy.  For those of you that aren’t from the US, I don’t know if the term “muscle car” will have any meaning for you but if you take a look at the Pontiac GTO Judge that Warren Oates drives in the movie you will get an idea about what muscle cars were all about.

The movie was not very successful (I can honestly say that I have never met a single person that has seen the movie).  Fortunately for you, I found a copy on YouTube and now you can have the opportunity to relive my experience from 1971.  Before showing the movie I thought you might like to learn a little more about it so here are some highlights that I borrowed from Wikipedia…..

Esquire magazine declared the film its movie of the year for 1971, and even published the entire screenplay in its April 1971 issue, but the film was not a commercial success. The film has since become a cult classic.  Brock Yates, organizer of the Cannonball Baker Sea-To-Shining-Sea Memorial Trophy Dash (better known as the Cannonball Run) cites Two-Lane Blacktop as one source of inspiration for the creation of the race, and commented on it in his Car and Driver column announcing the first Cannonball.

Two-Lane Blacktop is notable as a time capsule film of U.S. Route 66 during the pre-Interstate Highway era, and for its stark footage and minimal dialogue. As such, it has become popular with fans of Route 66. Two-Lane Blacktop has been compared to similar road movies with an existentialist message from the era, such as Vanishing Point, Easy Rider, and Electra Glide in Blue.

In 2012, the film was added to the National Film Registry

So, without further ado, here is our feature for today!  I hope you enjoy it…..as always, let me know what you think.

Today we have two great Holiday vocal performances.  First up is a beautiful Beach Boys song called Morning Christmas.  From what I have been able to determine, this song was pretty mostly a solo effort by Dennis Wilson, the most overlooked of the three Wilson brothers that were the foundation for the Beach Boys.  Let’s listen…….

Next up is On This Christmas Morning, a beautiful song as performed by the incredible Moody Blues.  I think you will like it!

My special gift to you today is Dennis Wilson’s only solo album, Pacific Ocean Blue, which was released in 1977.  The album was critically acclaimed and provided Dennis with some well deserved attention after being overshadowed by his brothers Brian and Carl for most of his career.  In a case of unbelievable irony, Dennis, the only Beach Boy that lived the surfing lifestyle that Brian Wilson wrote about, drowned in 1983.

RIP Dennis!  Here is a tribute to Dennis prepared as part of this years 50th anniversary celebration for the Beach Boys.