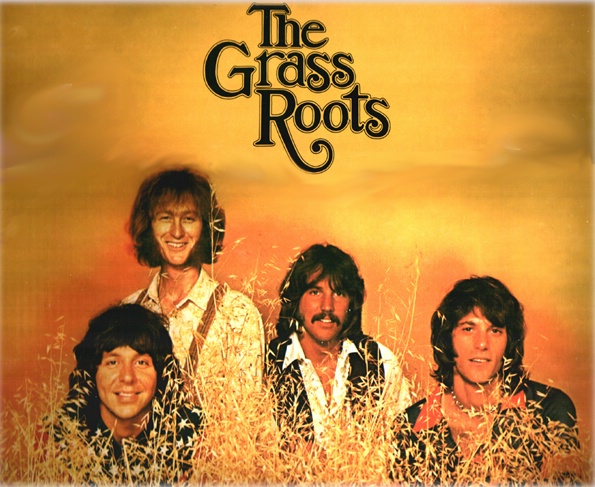 My friend Gerard from the Netherlands never ceases to amaze me.  We me met through this blog and have discovered that our backgrounds and musical tastes are extremely similar.  A while back he sent me some articles about, and songs from, a group called The Grass Roots.

Unbeknownst to Gerard, The Grass Roots have always been one of my favorites but I have never really talked much about them because I always thought that they were a “manufactured” group along the lines of the Monkees.  The material that Gerard sent me (a summarized version is provided below) convinced me that I might have been wrong about The Grass Roots.

The name “Grass Roots” (originally spelled as “Grassroots”) was the name given by PF. Sloan and Steve Barri for an LA group. With this group they would try to jump on the folk-rock bandwagon started by the Byrds. One of their songs, “Where Were You When I Needed You”, was recorded by Sloan and Barri together with  a now forgotten line-up of session musicians. Sloan was the lead singer and played the guitar. This song was made under the name “The Grass Roots”  and  was sent as a demo to some radio stations in Los Angeles.

The response to the song was lukewarm so Sloan and Barri started to search for a new group who who would record as  “The Grass Roots”. They found a San Francisco outfit, “The Bedouins”’, and together with this group they recorded a new version of “Where Were You When I Needed You”.  They also recorded an album by the same name.  This version of the Grass Roots was moderately successful but didn’t last too long because the members of the group wanted to record more of their own material.

Here is what I found on Wikipedia to fill in the story of The Grass Roots from 1967 forward.

The group’s third — and by far most successful — incarnation was finally found in a Los Angeles band called The 13th Floor (not to be confused with the 13th Floor Elevators). This band consisted of Creed Bratton (vocals, guitar), Rick Coonce (drums, percussion), Warren Entner (vocals, guitar, keyboards), and Kenny Fukomoto (bass) and had formed only a year earlier. Entner, who had been attending film school at UCLA alongside future Doors members Jim Morrison and Ray Manzarek, was drifting through Europe in the summer of 1965 singing and playing on street corners, when he met fellow busker and American Creed Bratton in Israel, where an Israeli businessman expressed interest in managing and promoting them. But the duo moved on and ended up back in LA by 1966, where they formed the 13th Floor and submitted a demo tape to Dunhill Records. After Fukomoto was suddenly drafted into the army, the group went through two replacements before finding singer/bassist Rob Grill. In 1967 the band was offered the choice to go with their own name or choose to adopt a name that had already been heard of nationwide.

In the beginning, they were one of many U.S. guitar pop/rock bands, but with the help of Barri and their other producers, they developed a unique sound for which they drew as heavily on British beat as on soul music, rhythm and blues and folk rock. Many of their recordings featured a brass section, which was a novelty in those days among American rock bands, with groups like Chicago just developing.

The bulk of the band’s material continued to be written by Dunhill Records staff (not only Sloan and Barri) and the LA studio-musicians who were part of what became known as theWrecking Crew played the music on most, if not all, of their hits.  The Grass Roots also recorded songs written by the group’s musicians, which appeared on their albums and the B-sides of many hit singles.

As The Grass Roots, they had their first Top 10 hit in the summer of 1967 with “Let’s Live for Today”, an English-language cover version of “Piangi con me”, a 1966 hit for the Anglo-Italian quartet The Rokes. “Let’s Live for Today” sold over one million copies and was awarded a gold disc.  With Rob Grill as lead singer, they recorded a third version of “Where Were You When I Needed You.” The band continued in a similar hit-making vein for the next five years (1967–1972).

So, inspired by Gerard, here is the summary of what I discovered.  The Grass Roots that I have always loved were initially a formed as a group called the 13th Floor (they were not a “manufactured” group after all).  The  13th Floor was presented with a unique opportunity to change its name to the The Grass Roots, a name that was already familiar to listeners based on the success achieved by the earlier version of the group that Gerard provided information on.  The 13th Floor jumped at this chance and made the best of it by producing a set of great singles in the next five years.

Enough history….let’s listen to some great songs from The Grass Roots.

First up is a song from the second incarnation of the group……Where Were You When I Needed You (note: The images shown with this song are a little confusing since they include pictures of both the second and third incarnations of the group).

Now let’s listen to some music from the third incarnation which in my opinion represents the glory years of the group with Rob Grill handling much of the lead vocals.  First up is Let’s Live For Today (1967)….

Live Performance of a Medley of Hits

I hope you agree with me, and Gerard, that The Grass Roots were an amazing band that needs to be remembered and celebrated.

I am sorry to report that Rob Grill passed away in 2011 at the relatively young age of 67.  This post is dedicated to him…..RIP Rob!

2 comments on “Groups That Time Forgot – The Grass Roots”